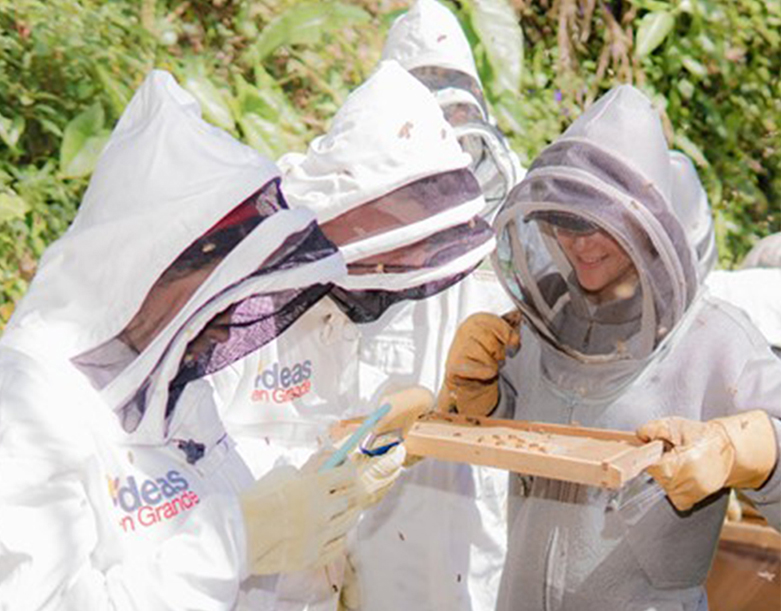 Located in a mountainous region of Colombia, the municipality of Salgar is well known for its coffee production. The residents of Salgar depend on local ecosystems for their food and livelihoods. However, climate change and variation (CCV) are destabilizing these ecosystems and thus threatening the community’s future. The desire to reconcile human activities with the natural environment impelled the establishment of an incubator initiative to help women and youth to generate and scale up ecosystem-based adaptations to CCV. Women and youth have been active in environmental projects in Salgar for several years but have lacked the support necessary to increase their impact. The incubator was led by a local woman who has many years of experience as an environmental project leader. It involved 47 participants. The incubator consisted of four training workshops on organic fertilization and soil recovery, sustainable agricultural systems, water sources and waterways restoration, and hedging. It also provided financial and logistical support for four initiatives led by different community leaders: nurseries for pollinators, the beautification of the green spaces of the local school, a virtual farmers’ market, and a booklet on recycling titled “Ecoheroes Saving the Planet with Bottles of Love.” The incubator also organized various networking activities with local organizations and businesses. This local initiative shows that offering a space for training, financing, and networking can generate innovative ideas, foster new partnerships, and boost the community’s capacity to act and implement positive change in informal settings.

Salgar is a municipality located in the Andes Mountains in Colombia. Its surrounding region hosts many ecosystems, which in turn yield a wide range of products such as honey, fruits and vegetables, and coffee. The region’s micro-climates and soils are indeed ideal for the cultivation of the high-quality coffee Colombia is known for. These ecosystems were until recently relatively stable. Spared by major erosive processes such as landslides and floods, they sustained the food security and livelihoods of 17,000 inhabitants. Climate change and variability (CCV) have started to threaten this equilibrium, impeding agricultural production and increasing disaster risks in Salgar’s ecosystems. The major floods that hit Salgar in 2015 served as a wake-up call for the community to better manage risks (see the local initiative “Let’s manage risk” ) and better harmonize the relationship between human activities and the natural environment.

This initiative focused on the latter objective. Specifically, it aimed to raise awareness and re-balance human activities with natural ecosystems. It was led by a local woman who has worked on environmental initiatives in Salgar for more than 5 years (hereby referred to as “the agent of change”). She has namely  been working to enable youth and women pioneers to create and scale up community-based initiatives.

The initiative functions as an incubator. There are three main components: training, financial support, and networking. Corantioquia, an environmental governmental organization, took charge of the training component, offering four workshops on ecosystem-based adaptation. Using a guide published by the Colombian Ministry of Environment, the workshops explored principles and processes that could maximize the capacity of socio-ecosystems to reduce climate risks and increase resilience to CCV. They focused on organic fertilization and soil recovery, sustainable agricultural systems, water source and waterway restoration, and hedging.

Furthermore, the project supported four women to implement their own initiatives:

Two complementary workshops connected community leaders with 20 young people with the support of the youth branch of CFA Fundación, an NGO that improves wellbeing with social and environmental programs (Fig. 2). These workshops covered various topics, including conscious beekeeping, home gardening, and tree planting. They resulted in the development of the fifth initiative supported by this project: the “trust store,” a food shop without employees where shoppers take what they want and deposit money in a box.

Finally, the workshops and activities offered opportunities to connect residents and community leaders with many regional organizations. Networking occurred throughout the project process and activities, from its inception to the closing ceremony.

The local initiative started with activities to convene and motivate local residents, allied organizations, and businesses from rural and urban areas of Salgar. The agent of change held a meeting in February 2020, following communications in the local media (Fig. 3). In this meeting, she presented the project and the topic of the four workshops to the 54 attendees (Fig. 4). The participants were also asked to provide information for an initial assessment of their general knowledge on ecosystems and the other topics of the workshops.

Corantioquia, a regional environmental organization, then hosted the four digital workshops. With ADAPTO, the agent of change financed participants’ data packages so they could connect to the workshops irrespective of financial or public health restrictions. As a result, 47 people were able to participate in the workshop. They came from urban and rural areas of Salgar, as well as the municipality of Urrao, located 73 km from Salgar. The agent of change supported each participant on a case-by-case basis to make it as easy as possible for them to connect to the sessions from their locations, especially in rural areas. To reach a larger audience, the agent of change also produced material for dissemination in the media, including educational television programs (Fig. 6). In parallel with the project, the agent of change and other community leaders promoted the municipal agreement to ban the use of single-use plastics and studied the municipal development plan in relation to climate change.

In December 2020, the agent of change launched a call for proposals in the community for ecosystem-based adaptation initiatives. The interested parties were asked to submit a brief document explaining their idea and the expected results, as well as a budget. Then, the agent of change selected the four best initiatives, described above, to be supported and implemented in the following months.

Finally, in February 2021, the agent of change, together with Corantioquia and other regional organizations, held a forum titled “Social and Solidarity Economy and Adaptation to Climate Change” as a closing event for the project. The event gathered 55 people, including stakeholders from the municipality and project participants. It included a public presentation of the financial accounts, the learnings from the four ecosystem-based adaptation initiatives in Salgar, and the awards for the four leaders of the initiatives. Each participant signed a municipal pact for the commitment to climate change adaptation. Interestingly, this ADAPTO initiative developed without any major conflicts over power or resources. The project slowed down when the pandemic was declared, and the agent of change adapted the activities to new public health restrictions by shifting to a virtual format (Fig. 5, point 3). The use of financial resources to print booklets, organize workshops, and pay for mobile connections for low-income groups helped maintain momentum during the activities (Fig. 5, point 7).

The agent of change held the main leadership role throughout the execution of the project. Her long experience working with many of the actors involved (see list in Fig. 5) helped expose a remarkable network existing in the region while also providing the basis for new connections. New collaborative leadership roles emerged, as the four community leaders — also women — took charge of implementing the four selected proposals.

The ADAPTO-Salgar team, comprising a professor and a researcher from Pontificia Universidad Javeriana, initially supported the agent of change with ideas and tools to plan and collect information for subsequent research, and to resolve specific data collection issues. However, the initiative remained community-led and the university’s role was limited to offering support for planning the activities and finding alternative solutions in the pandemic context.

The community actively participated in the workshops and initiatives. Most participants were women, and more than 20 young people were involved in the activities. The four initiatives were developed and implemented by community leaders, three of whom were women. Women and youth were already active in environmental initiatives in Salgar, but this initiative empowered them to continue promoting and developing initiatives close to everyday spaces such as home and the local school.

Local and regional organizations (see list in Fig. 5) supported the project by providing access to facilities, equipment, expert knowledge, and organizational support, while also helping with dissemination of progress updates and results. For example, the CFA Foundation organized the meetings with the youth, Corantioquia organized the four workshops, and Assanpas provided material for dissemination on local TV and radio channels.

First, hosting virtual activities and disseminating material in the media makes it possible to reach a large regional audience and connect urban and rural participants. Participants from remote rural areas can avoid significant transport costs and save time by participating online. The dissemination of information about the multiple environmental activities carried out in Salgar gave visibility and recognition to the initiative, and contributed to enhancing environmental awareness.

Second, networking activities with local organizations and businesses can create synergies for innovative ideas and new partnerships. Having a significant number of organizations involved enriches the process through shared expertise and resources. The network can therefore greatly support community-based initiatives and positively influence the depth and extent of the impacts.

Finally, offering a space for training and interactions, like an incubator, can boost community action. In this case, the fact that so many young people and women participated in the training process and field activities drew attention to these groups’ existing capacities and leadership skills, while also highlighting the potentials of community-based action. The project activities have had a snowball effect, as additional proposals have emerged autonomously and informally.

Several activities will continue beyond the official dates of the ADAPTO project:

The “incubator-like” model for supporting bottom-up initiatives can be replicated in other Latin American countries. Because it favours the germination and interconnection between several initiatives, this model has proven effective for community- and ecosystem-based adaptations. The little financial resources provided by the incubator can make a big difference in helping make these initiatives reality and scaling up impact. Networking with other incubators in Latin America actively engaged in ecosystem awareness and protection could also be a way to scale up the model and share insights and approaches.

Links to videos and audios: