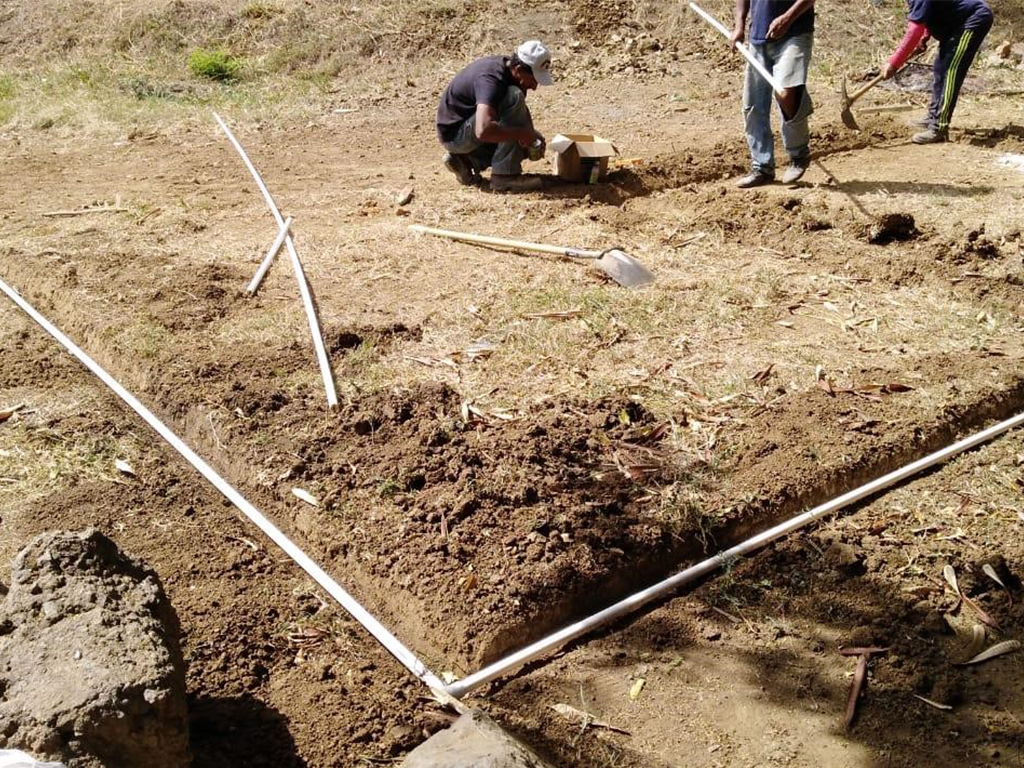 This initiative consists in building a low-cost prototype of a stormwater collector system in El Poli Park, an area at high risk of flooding in the neighbourhood of Las Américas in Yumbo, Colombia. The objectives are threefold: to test different low-cost solutions for stormwater channels and tanks; to reduce runoff flood risks for the park and the houses downstream during the rainy season; and to store that water for reuse in a new community garden during the dry season. Three types of stormwater channels and two types of tanks were built and tested, thanks to the collaborative work between the community of Las Américas, private partners, and the Universidad del Valle in Colombia. The project complements other initiatives, such as the sustainable urban drainage system (see “Placemaking and place protecting”) and the community garden (see “Urban vegetable garden”). While the evaluation of the prototype is still underway, the preliminary results suggest it can be a viable alternative to more expensive stormwater infrastructure. Designing and building such infrastructure with the community also provides the opportunity to enhance local water management knowledge and implement multipurpose design, for example by integrating a universally accessible pedestrian path.

Las Américas is a neighbourhood in Yumbo, Colombia that is severely lacking in green and recreational public spaces. As such, the community wanted to transform a piece of land donated by a private company into a park. However, because of climate change, the hilly area is increasingly prone to intense and frequent stormwater flooding during the rainy season. Water is also becoming increasingly scarce in the dry season due to prolonged droughts. Creating a park on a slope is hence a challenging task in this context.

The initiative consisted in building a prototype of a low-cost stormwater collector system. It had three objectives. Together with the Sustainable Urban Drainage System (SUDS, see “Placemaking and place protecting”), it aimed to reduce the risk of flash floods that could damage the park and the communities living downstream during the rainy season. This initiative collects the stormwater coming from the SUDS by channeling the runoffs into storage tanks. Second, it aimed to collect and store that water for the irrigation of the community garden and orchard in the dry season. The garden and orchard are part of another park-related initiative (see “Urban vegetable garden”). Finally, it aimed to test low-cost construction techniques for the construction of the stormwater channels and water storage tanks. Traditional stormwater infrastructure would be too expensive for the community to implement. Such investments in informal settings are generally not the priority of Colombian state or private actors. Using local knowledge, simple techniques, and recycled materials can therefore help the community to reduce risk autonomously.

With the support of researchers from the Universidad del Valle and several private partners, the community built a 112-metre-long stormwater channel and connected it to water tanks. The stakeholders divided the channel into three sections to experiment different low-cost types. The first 51-metre section is an open-air concrete path with a gentle slope towards the path’s transversal centre. It collects the water collected by SUDS modules. The second section is a 17-metre path constructed with permeable EcoDeck modules, gravel, and an underground perforated pipe. These recycled polypropylene modules have a useful life of more than 30 years and allow the passage of rainwater into the subsoil, thus leaving the exposed surface free of moisture and mud. The third section is a 44-metre green trench made of geotextile, gravel, and an underground perforated filter pipe. The three sand traps and the three water tanks with filtering capacity were built at the end of the three sections (Fig. 2). The tanks were built with old plastic baskets used for carrying glass bottles, and measure 1.60 m x 1.70 m, 1.20 m x 1.40 m and 1.20 m x 1.52 m, respectively (Figs. 4 and 5). They store the water for plant irrigation, retain the solid waste that runoffs may bring, and slowly release the water into the ground, maintaining the soil of the future garden moist.

This initiative comes from a longstanding collaboration between the community of Yumbo and the Universidad del Valle around water-related issues. Since 2008, professors and students from Universidad del Valle have worked with the community of Yumbo to identify problems and develop cost-effective and community-based strategies for water management in urban environments. During workshops held in 2017, Angelica Trejos, Clementina Hernández, and other residents of the Las Américas neighbourhood suggested to improve and secure the only collective space in the neighbourhood for sports and recreational activities, which is constantly flooded. Participatory workshops were organized by the Universidad del Valle and the community action board, resulting in a comprehensive proposal for the transformation of that space into a park with adequate water infrastructure. Different groups, such as children, adults, youth, and women developed the various ideas in seven diagnostic workshops held in 2017. The proposal included several initiatives, including this one, which were interconnected to make “economies of scale” with the resources provided by the different entities involved, such as ADAPTO and local private companies. In doing so, the community transformed a problem—i.e., stormwater flooding—into an opportunity to collect and reuse water for a community garden.

Based on this objective, workshop participants studied, designed, and experimented different ways of channeling and storing stormwater.  Students from the Master’s program in integrated water resource management at the Universidad del Valle provided the necessary technical support. A total of 39 self-construction workshops were held, providing recreational and technical content. In addition, the private sector donated materials and provided technical knowledge, allowing more complex elements and techniques not initially foreseen to be implemented. This contribution improved the technical quality of the project and motivated the community to continue with the exercise.

Subsequently and through 2018, the community action board and the university jointly organized 12 design and planning sessions for the implementation phase. Sixty-eight community members participated. In parallel, university stakeholders and the municipality prepared the site with six days of digging (Fig. 1 and 3). The municipality allocated the building permits after a waiting period of four months (point 5, Fig. 6) and in July 2019, the construction of the stormwater channels and tanks began. Nine active members of the community, professors and students from the Universidad del Valle, and representatives from donor companies participated in the 58-day construction process.

The academic partners from the Universidad del Valle led the initiative. Researchers and students from the Urban Intervention Laboratory of the School of Natural Resources and Environmental Engineering, together with students from the Master’s programs in Integrated Water Resource Management and Architecture and Urban Planning, led and participated in the research as well as the co-design of the water channels and tanks. They also managed the initiative’s resources and its implementation. Many of the collective workshops and activities were organized jointly with the municipality, while also serving the SUDS project (see “Placemaking and place protecting” for more details).

Women also played an important role in this initiative. The urban garden project aims to respond to women’s needs and wishes. Women wanted a stormwater collector because they need water for the garden during dry seasons. They convinced the business sector to invest financial and in-kind resources, and co-designed the infrastructure together with the academic and business partners.

The business and municipal sectors also played a significant role. Cementos ARGOS donated 330 bags of cement and Ecodeck donated 32 m2 of permeable flooring. The municipal Secretariat of Infrastructure provided support by carrying out cleaning and adaptation activities in the intervention area, using machinery for adaptation, demolition, and soil removal.

While the evaluation of the prototype is still underway, stormwater tanks made from recycled plastic baskets have so far proven to be an effective alternative to more expensive stormwater infrastructure in vulnerable low-income environments that are facing increasingly intense periods of heavy rain and droughts. This type of low-cost and ecological infrastructure works by retaining stormwater so that it infiltrates the ground slowly instead of exceeding the capacity of the soil and the sewage infrastructure to absorb and collect the water.

Co-designing low-cost infrastructure with community members has the potential not only to enhance local water management knowledge and capacity, but also to bring new functional and design opportunities, such as novel assemblages and multipurpose design (in this initiative, a stormwater collector, the irrigation of a garden, and a pathway that is universally accessible).

The stormwater infrastructure is now functional, and the park is being used by the community. The neighbourhood’s community action board now manages and coordinates the remaining park projects, including the completion of the garden. To this end, the board organized meetings with business and governmental representatives in charge of the next interventions. A more detailed assessment of the efficiency of the infrastructure is underway. Provided that the evaluation is positive, the system could easily be replicated since it can be built in different sizes and for various contexts in a simple, economical way and without great technical requirements.