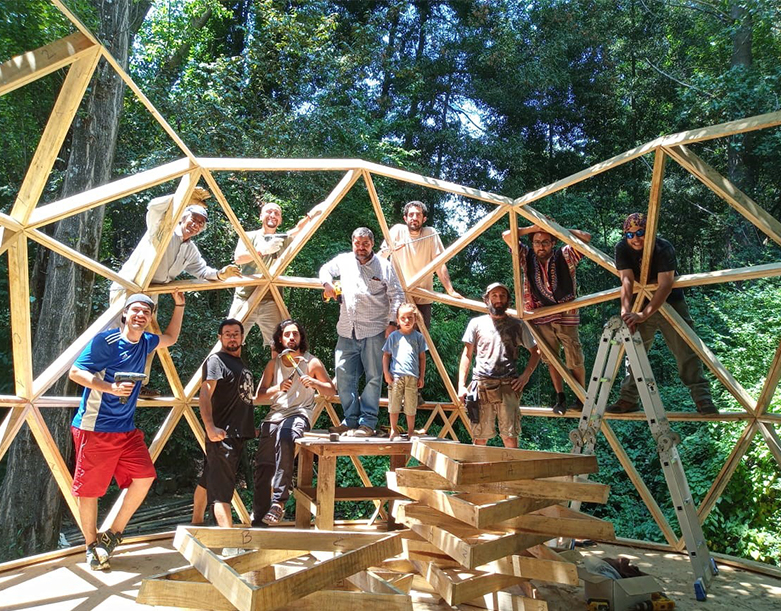 The Nonguén River is a water source of great importance for the city of Concepción and an important element of the local ecosystem. However, widespread lack of awareness in the community and consequent lack of care leave the river exposed to manifold threats, especially water pollution due to casual rubbish dumping and illegal sewage systems. In this context, the community of the Entorno Educador school created a demonstration space next to the river, covered by a wooden dome, to host educational activities such as school classes, bread making, and arts and crafts. The space was also designed to support ongoing activities such as rainwater collection, greywater treatment, composting, and gardening. The main lesson of this project concerns the value of strong organization and execution. The project demonstrated that a well-planned workshop, guided by an expert in dome building, can guarantee good results and hence replicability.

The Nonguén River is a water source of great importance for the city of Concepción, which is located a few kilometres away on the other side of the valley. The Nonguén area is primarily urban, and its geography is defined by the river. Increasing ignorance and indifference regarding the river’s vital importance, both as natural resource and as backbone of the urban and social territory, has led to a deterioration of the landscape as well as the ecosystem associated with it.

Through pedagogical activities, Entorno Educador’s community of parents and friends had already been making great efforts to address the problem of indifference toward the river and to raise awareness about its crucial importance for the wellbeing of the whole territory. However, the lack of human presence in the area made us want to establish a more direct, permanent, significant, and symbolic relationship with the river, so that visitors could better appreciate its beauty, landscape, and ecosystem.

The school community led the initiative. They decided to build a multifunctional dome structure behind the school, right by the water, that could foster educational activities related to both the school and the river. The choice of a dome structure owed to a simple practical factor: one of the parents from the school is an expert dome builder. The construction is also close to a grey water management system and a rainwater recovery system, which can benefit the vegetable garden. The dome will host meetings, workshops, and educational activities for children, young people, teachers, and other members of Entorno Educador and the Nonguén community at large. These activities will include workshops on forest therapy and bio detergents, demonstrations on the grey water recovery system and edible vegetable garden, as well as regular school classes. Thus, the dome will foster educational and reflective work on individuals’ and the community’s relationship with the river. In turn, these activities should promote the revaluation of the river as a fundamental resource for the preservation of local biodiversity.

The implementation of the initiative began in January 2019 and involved several community events, such as training sessions for the development of skills and techniques related to the participatory construction and reflection sessions on the importance of the river for the community. The workshop was designed to be an empowering experience, where participants would acquire concrete knowledge on dome building. In addition, a grey water filtering system was installed by means of another micro-project. Today, the filter allows for the watering of the vegetable garden and composting area, and makes it possible to conduct workshops on forest therapy and the production of bio detergents. With the help of a group of parents, the Entorno Educador school has organized different working groups such as the vegetable garden group, the management group, and the construction group, which is led by a specialist in dome construction.

As can be seen in Figure 3, this period was a moment of great enthusiasm. It established a dialogue between various community actors and consolidated a partnership with the university. The beginning of the construction process also aroused great interest and participation from the community. Since the building group was mainly male, the mothers worked on clearing and preparing the site as well as preparing lunch breaks.

However, the initiative also faced great obstacles in its implementation. While the project made significant progress during the first months of 2019, with the main structure built on the weekend of the workshop, the activities had to be suspended in October, when mass protests broke out in Chile. The protests caused economic and political instability and ultimately led to the declaration of martial law. While activities were able to resume in early 2020, the construction was suspended again in February 2020, as two forest fires broke in the Nonguén Reserve, located upstream, and the closing of the road made it impossible to reach the school. The lockdown and public health restrictions implemented during the COVID-19 pandemic further prolonged the suspension of the construction activities.

In the summer of 2020, the project resumed, although not with the same level of participation. These major events impeded the momentum of the work groups. In addition, the dome specialist and leader of the construction group moved to another city. The low momentum and the absence of leadership and expertise in dome construction impeded the completion of the dome, including steps such as the installation of windows, doors, and exterior sealing.

Despite these interruptions, the community already sees the dome as a space with high educational potential. It provides a covered space where many different initiatives can be developed throughout the year, including classes, workshops, and meetings.

A group of parents and friends of the school participated in the project throughout all its phases. The workshop was led by a parent who is an expert in dome building. He oversaw the whole building process, including later fixes to the roofing, which could not be completed during the timeframe of the initial workshop. The parents’ participation was sustained due to their ongoing involvement in school activities during the week. Their continued involvement was important, considering that only the structure was built during the duration of the workshop and further work was needed to put the roof in place.

The Universidad del Bío-Bío acted as a sponsor, contacting local leaders and financing the proposed initiative. It is expected that the filter will be completed within the budget. The participatory approach strengthened ties in the school community and reinforced relationships between participants, friends, neighbours, and men and women of different ages from the school community. As a result, collective synergies were created within the school. These synergies were reflected in the project’s sustained momentum as well as the “mingas,” or collective work sessions.

Planning activities well guarantees a high degree of success. In this case, the group activities have helped the project look professional despite the informality of the construction, thus helping to attract future participants to similar workshops. However, we have also learned that provisions should always be made to replace a leader when his or her expertise is rare in the field. In this project, the leader’s departure has slowed down the management and promotion of the finishing stages of the construction process to this day.

As a project centering on the building of a dome structure, this micro-project is highly replicable. This is because the building process follows a formulaic process, which, once learned, is easy to communicate and replicate. However, the replicability hinges on the use of a hands-on learning process and the leadership of an expert in dome building. Hence, there is a strong dependence on a certain expertise. One that if absent, the replicability of the project is hindered. Future actions include the installation of windows and a door as well as insulation. Still, several related pedagogical and community-led activities have already been taking place on a regular basis (mainly classes and meetings).