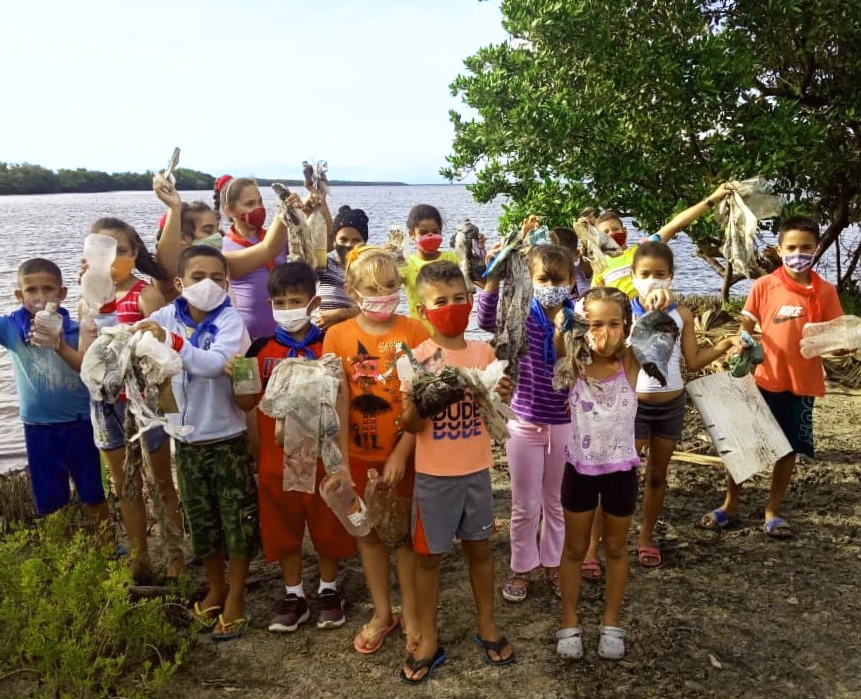 In Carahatas, a fishing community located on the north shore of Cuba, local adaptive practices have emerged in response to recurring hurricanes and tropical storms. But researchers at the Universidad Central and local ADAPTO team have found that residents are still not fully aware of how climate change will affect them in the long run. Academics anticipate that local and traditional practices will not be enough to face sea level rise, which is likely to leave much of Carahatas underwater in 50 years, and hurricanes, which are becoming more frequent and intense. Both scholars and villagers know that the best way to improve existing practices is to educate younger generations of residents on climate change impacts, so that the community can be better prepared in the future. Until recently, the curriculum of the local elementary school failed to cover climate change. In response, teachers collaborated with the ADAPTO team to create the circle of interest “I adapt,” an extracurricular program where children gain hands-on knowledge and skills on topics linked to global warming. Its objective is twofold: to educate future generations to face climate change risks, and to raise adults’ awareness of new risks and environmental threats through the influence of children in their respective families. Since 2018, this initiative has impacted about 40 children and 100 villagers. It has created dozens of spaces to discuss climate change projections, and to conduct role-play games, drawing and mapping workshops, board and computer games, and waste collection.

The initiative has been recently approved by the Provincial Education Office, and can now be replicated among schools in other coastal settlements.

Residents of Carahatas, like those of other coastal fishing settlements in Cuba, depend on the sea for their livelihoods and are exposed to increased risks due to climate change. By 2050, it is estimated that 15% of houses in Carahatas, and 11 buildings hosting state-provided social services (including a library, restaurant, and stores), will be under water due to sea-level rise. By the year 2100, 90% of current houses will be uninhabitable. In the meantime, the community remains at high risk of flooding due to sea-level surges and hurricanes that are increasingly frequent and devastating.

The Universidad Central (UCLV) completed a study on climate change awareness in Carahatas. It revealed that residents of Carahatas, including children, are generally unaware or skeptical of climate change and the impacts it will have on the community. The fact that children were not educated on the matter appeared particularly problematic, given that the younger generations will be the most impacted by climate change, and are poised to be the leaders of climate change adaptation. Literature therefore suggests climate change and its effects should be part of basic education. Besides, because children are more willing to assimilate new knowledge than adults and they have great influence in the community of Carahatas, they could also contribute to raising awareness of the issue within their families.

While the elementary school of Carahatas is recognized by the Provincial Education Office for the quality of its teaching, its curriculum did not include any content on climate change and its effects on coastal settlements. In response, the University collaborated with education authorities and the municipal government to initiate “I adapt” as part of an extracurricular program in which teachers and students mobilize to learn or train in topics of vocational or social interest. The program is called “Circle of Interest” and is part of the Cuban educational system. Developed by elementary teachers, “I adapt” aims to develop children’s awareness of climate change risks through entertaining extracurricular activities. It also seeks to disseminate acquired knowledge to the rest of the community through children’s influence on their families and by involving family members in the activities. Teaching elementary school pupils about climate change using examples taken from their living environment is novel in Cuba. As a result, the children participating in the activities gain basic knowledge of what climate change is and how it affects their village, of the most vulnerable areas of the community, and of what is likely to happen in the future. The activities are centered on three themes:

The pedagogical strategy included workshops (Fig. 2, 5, 7 and 8), tours and cleanups of the coast (Fig. 1 and 4), cultural activities and games (Fig. 9), and the use of diagrams, photos and videos (Fig. 10). It focused on the students’ assessment of their home and village as well as their family members’ knowledge of the subject. The initiative also equipped one classroom with educational audiovisual tools and other materials.

“I adapt” is closely related to the “Women of the Sea” initiative, wherein a group of women formed a community-action group to learn about, influence, and act on issues related to climate change. Several elementary-school teachers and mothers involved in the community-action group became knowledgeable on climate change issues and supported the need for “I adapt”, following the assessment from the university on the need for education about climate change (Fig. 6, phase 1). The teachers involved in “Women of the Sea” then took a leading role in “I adapt” and the mothers followed children’s related activities at home. The initiative “I adapt” built on the training received by teachers and adapted it for children. The initial phases of conception and planning had great momentum (Fig. 6). Teachers had a strong desire to integrate an official model that would guarantee the sustainability of the initiative. The “Circle of Interest” was found to be an ideal format to fulfill the objectives while remaining within the Cuban educational system (to ensure its sustainable operation and dissemination). Weekly meetings between teachers and students were held to coordinate and develop the activities. The ADAPTO-Cuba team joined in bi-monthly meetings to follow up on the activities, offer updated information, and provide new multimedia content. The municipality’s Department of Education supported and approved the initiative.

The main difficulty faced by stakeholders related to acquiring the financial resources to equip the specialized classroom, due to national regulations on international funding. This affected their expectations about the reach and quality of the children’s education (Fig. 6, phase 6). A collaboration between the University and Habitat 2, an international university-community project funded by the Swiss Cooperation, contributed to solving the issue by identifying common interests. Habitat 2 contributed to the funding of the initiative and to resolving regulatory issues. It also donated a desktop computer and contributed to finding audiovisual material, such as videos, maps and photos on climate change. In addition to educational didactic games, two teachers specialized in arts led cultural activities for children and their families (Fig. 6, phases 7 and 8). “I adapt” is now set to operate sustainably, thanks to annual student participation in a “Circle of Interests” that is well organized and is approved and financed by the Provincial Education Office.

The three researchers from the University Central ADAPTO-Cuba team identified the needs, proposed the initial idea and supported the curriculum development. The researchers also trained the teachers and led workshops with the students. They mediated conversations and approvals with the government and the Municipal Directorate of the Ministry of Education. The university team also contributed to solving the financial imbroglio by partnering with Habitat 2. Eight elementary-school teachers carried out the activities with the 39 students, which represent about 80% of the elementary school’s pupils. Mothers and close relatives of the children were also involved in the activities. The teachers who have permanent positions will continue to lead these activities in the years to come, and the Directors of Education at the provincial and municipal levels approved the initiative and supported the potential replication of the program – and possibility of funding – for the school in Carahatas and other schools in the region. Teachers are thus confident the initiative will continue to thrive in the coming years.

Discussing climate change and adaptation in elementary-school classrooms is unprecedented in Cuba, because the topic is not officially included in educational programs. The “I adapt” program proved to be a good way to simplify a relatively abstract issue like climate change, in a setting where there is low awareness among the adult and child population. The use of an alternative form of teaching greatly contributed to the children’s learning and motivation.

The original hypothesis – that children could greatly contribute to enhancing climate change awareness in the community – has been validated. This project shows that educating children can mobilize the community and can therefore be a good starting point for generating climate change risk awareness. Women, in particular, participated in high numbers in the projects involving children, as per their traditional roles in a community where men are often away fishing for extended periods. The teachers involved in the project evaluated that, indeed, children as well as their families learned about the effects of climate change on their community.

It is advisable to associate with prestigious institutions in the community, such as schools, and to use existing frameworks, such as an extracurricular program, to maximize the population’s endorsement of and participation in the initiative. This also facilitates partnerships with institutions and governments, which further contributes to the project’s legitimacy and sustainability.

The initiative received official approval for its continuation and will incorporate new students every year. It is expected, as more of the younger generation becomes aware of climate change risks, that the project will also influence action outside the school environment. In order to improve the quality of education, it is necessary to obtain more equipment and material for the specialized classroom, which is currently limited to a computer and a few games. Additional equipment and materials include a projector, a recording camera for the dissemination of actions, identity elements such as t-shirts and hats, maps and other educational visuals about climate change, as well as school supplies for visual art activities and additional board games. These didactic resources are important for “I adapt” because they provide a simplified way to visualize the problems and consequences of climate change and make the subject attractive to children. Having more equipment and material would definitely improve the activities and enrich the learnings. It is expected that the teachers of “I adapt” will be able to manage the additional resources provided by ADAPTO to be used in the project activities in 2021, providing there is good control of the ongoing covid-19 pandemic. The ADAPTO-Cuba team already disseminated the project in regional meetings on the Cuban policy for climate change adaption. The team also hope to present the work of teachers in pedagogical events. However, the experience must be systematized – with adequate equipment and materials – before it can be replicated in other similar settlements in Cuba, with the coordination of the Ministry of Education. With the right institutional adaptations and alliances to include the subject of climate change in official education, the initiative could be applied in other contexts throughout Latin America. The initiative could also benefit from collaboration with other institutions, such as the Ministry of Science, Technology and Environment and the Ministry of Culture.