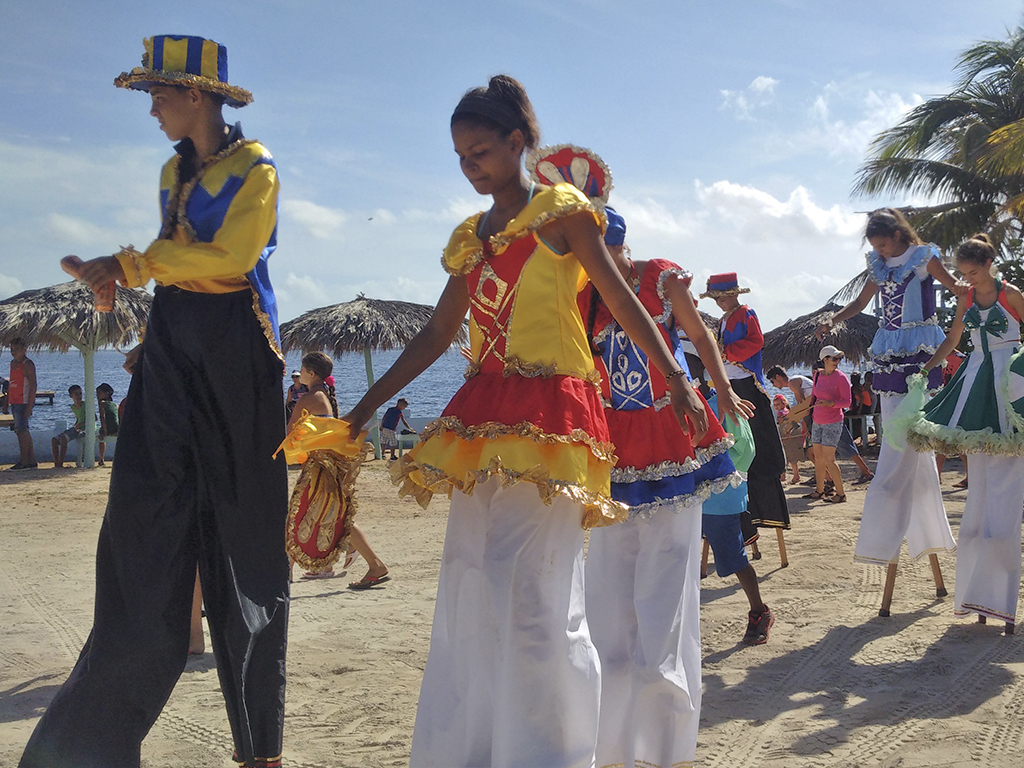 The annual Coastal Marine Festival is the largest cultural event in the fishing community of Carahatas. For 20 years, the festival has celebrated local traditions and raised environmental awareness about Las Picúas Cayo Cristo, a protected coastal area with fauna and flora of high value.

The two-day festival includes various cultural and recreational activities. It is organized by the Biological Station (a local environmental organization), community volunteers, and the municipality. Given the event’s existing reputation and level of organization, researchers from the Universidad Central Marta Abreu de Las Villas saw the festival as an opportunity to boost climate change awareness and encourage adaptation in the community. Stakeholders supported the event and integrated a focus on climate change within the festival’s overall environmental theme. They provided relevant information on the causes and effects of climate change, as well as suggestions on how to adapt the festival’s theme and activities for future editions. The researchers also helped reinforce the partnership between the Biological Station, volunteers, and the municipality, namely by inviting representatives from the Ministry of Environment. The extended partnership approved the theme and program changes, and will help sustain the quality of the organization in the long term. Unfortunately, neither the 2020 nor the 2021 edition took place because of the public health restrictions implemented during the COVID-19 pandemic.

However, the common efforts invested in the new program and partnership will serve the next editions. The initiative shows how building on existing cultural events is an effective means of implementing climate change action.

At the beginning of every summer season, a festival livens up the streets and beaches of Carahatas, a fishing community located close to the protected area of Las Picúas Cayo Cristo in Cuba. Since its inception 20 years ago, the festival has conveyed key environmental messages and promoted responsible environmental behaviour in the community through the celebration of local artistic talents and traditions. The first editions focused on the importance of protecting species such as the pink flamingo, which is endangered by inadequate waste disposal and unsustainable hunting practices. The event is very popular in the region. The residents of Carahatas and the Santa Clara region—children and adults alike—participate in the festivities in great numbers. The activities are many: artistic performances, speeches, dances, literature and painting contests, local food handicraft exhibitions, a night party, theatrical performances by children, a float parade, and popular games on the beach and in the sea. The organizers (a local environmental organization called the Biological Station, and the municipality) argue that the festival has significantly improved environmental behaviours and practices. The waste-free coastal area and the growing population of previously threatened animals are evidence of these changes.

The researchers from the Universidad Central Marta Abreu de Las Villas (UCLV) saw the festival as an opportunity to boost the community’s awareness of climate change effects and improve their knowledge of the strategies that must be implemented to help people adapt and reduce risks. UCLV researchers found that the community remains unaware of the increased hazard risks induced by climate change, such as sea level rise and more damaging tropical storms. Enhancing awareness of these risks is necessary so that the population of Carahatas can be proactive in protecting the settlement and the natural reserve, and in maintaining their traditional livelihoods and traditions.

Taking advantage of the event’s established reputation and organizational structure, the researchers supported the event stakeholders (the Biological Station, volunteers, and representatives from the municipality) in recentring future editions of the festival on the theme of climate change. Most of the initiative’s activities focused on preparing the next editions. They included work sessions with researchers, organizers, and a few volunteers, focused on selecting the new thematic activities. Here, researchers provided key information on the causes of climate change and its impacts, on a global scale as well as in Carahatas. The group also discussed climate change adaptation actions and policy in Cuba. Event stakeholders then planned the festival activities so that the participants would get accurate information and feel equipped to contribute to the discussion. For instance, information on climate change would first be provided in speeches. Then, follow-up discussions on how to tackle the issue in Carahatas would be facilitated through artistic contests or other participatory activities.

Unfortunately, the public health restrictions implemented to contain the COVID-19 pandemic made it impossible for the 2020 and 2021 editions to take place. The next edition will occur when health authorities will allow social gatherings to occur once again. In the meantime, UCLV researchers and the festival organizers are monitoring the situation and working on securing funding for the next editions.

The initiative followed a case study conducted by UCLV researchers in Carahatas. The study highlighted the relevance of the festival as the largest cultural event in the community. Grounding an initiative about climate change’s effects on such a popular cultural event became particularly evident. This led to the hereby idea of incorporating climate change related content into the general theme of the festival.

The idea for the initiative came from a case study conducted by UCLV researchers in Carahatas. The study highlighted the festival’s relevance as the largest cultural event in the community. The potential benefits of grounding an initiative about the effects of climate change in such a popular cultural event became evident. In turn, it was decided that climate change-related content would be integrated into the general theme of the festival.

To implement the initiative and develop the new theme, the UCLV researchers worked with organizers and volunteers, including local leaders, teachers, and specialists from the Biological Station. They first worked together to generate common understanding on the impact of climate change on the flora and fauna of the protected area, the village, and the Biological Station—which is itself located in a flood zone. Convinced of its importance for the medium- and long-term future of Carahatas, the stakeholders then agreed to put climate change impacts affecting the at the core of new editions of the festival (Fig. 4, phase 1 and 2).

This work also resulted in renewed commitments from the organizers, community volunteers, and the university to collaborate toward the planning of the 2020 edition (phase 3). The municipal government, festival organizers, and volunteers collaborated closely in the subsequent phases, with the support of the university (Fig. 4). Local representatives from the Ministry of the Environment—specifically, those in charge of the implementation of the national policy for climate change adaptation—also joined the partnership and provided feedback on the new activities. The organizers obtained their scientific support for future editions of the festival (phases 3, 4 and 5).

Subsequently, the researchers and event organizers decided to maintain the festival’s structure and activities. This decision made it possible to implement the thematic change without causing significant financial impact. They then planned the 2020 edition’s activities in great detail, by integrating climate change aspects into the existing activities (phase 4). For example, the organizers adapted the painting contest, which used to focus on environmental protection practices and the beauty of the natural environment, to shift the focus toward the effects of climate change on local flora and fauna, the village, and villagers’ livelihoods. The festival organizers, the municipal stakeholders, and the representatives from the Ministry of Environment approved the changes for the future editions (phase 5). The following phases were postponed until the sanitary and epidemiological conditions can allow the festival to take place. Even as COVID-19 paralyzed public activities and visits to Carahatas, the organization of the event was completed mostly through social networks.

UCLV researchers and representatives of the Ministry of the Environment joined an established team of stakeholders who were already involved in the management of the festival: an environmental institution called La Estación Biológica, or Biological Station (also responsible for the management of the protected area of Las Picúas Cayo Cristo), more than 50 community volunteers, and the municipality of Carahatas. The participation of the UCLV researchers was particularly important in the first phases, as part of the process of convincing stakeholders of the importance of climate change in ecosystem conservation. The researchers also acted as mediators between governmental stakeholders and the Biological Station organizers during the approval process for the change of theme. The Biological Station, the main organizer of the festival, received the idea positively and then led the process of adapting the activities to the new theme. UCLV researchers provided scientific and technical support. Community volunteers contributed to the preliminary and detailed planning of the new theme and activities (phases 3 and 4). They will be essential to the implementation of the activities planned for the next edition of the festival.

The festival’s new theme and content remain to be “tested” with the public. We do not know yet how the event will help raise climate change awareness and encourage action in Carahatas. Nevertheless, the preparatory phases have already yielded several lessons.

One of the most important ones relates to the advantages of building on an existing event with established organizational structures, practices, and partners, rather than creating a completely new initiative. We know that these advantages are significant. In Carahatas, stakeholders were able to initiate climate change action by integrating existing partnerships and collaborating with new actors (e.g., UCLV and the Ministry of Environment), all the while limiting additional financial expenses. The result—a two-day festival centring on climate change and ready for implementation—was achieved particularly efficiently.

What was key, however, was identifying the common interests shared by all the actors involved, from the very outset of the organization process. In this initiative, we found that the organizers, the municipality, and the municipal delegation of the Ministry of the Environment had a shared interest in working together on the issue of climate change. In addition, it is important to create the conditions that will facilitate the sustainability of the initiative, both in terms of financing and providing information and advice. Not all previous editions of the festival had the same quality in terms of logistics and organization. The work done to strengthen the existing partnership helped secure the legitimacy, financing, and relevance of the next editions.

The COVID-19 pandemic impeded the successful realization of the 2020 and 2021 festivals. However, it was possible to complete a considerable portion of the planning and organization work through digital communication channels. The researchers have kept in contact with the organizers, offering updated information on climate change effects and the implementation of the national climate change policy. This continued exchange has made it possible to keep the plans and content of the activities up to date.

The next edition of the festival, originally planned for 2020, will occur when the public health restrictions are lifted. As they usually do, the organizers will reach out to the regional and national press to ensure good coverage of the festival. After this edition, the stakeholders will review the festival’s activities and the program with a view to improving future editions.

Based on the high community engagement in the other local ADAPTO initiatives, it is expected that the event will be successful in generating popular interest in climate change issues. The idea of adapting existing popular cultural events by integrating a climate change theme and/or activities related to climate change is indeed promising and could be applicable in other, similar contexts. There are many popular festivals in Cuba. The Carnival is a prominent example of a festival that takes place across the nation. Other cultural events, such as the Gibara Poor Film Festival, could also learn from the Carahatas initiative.