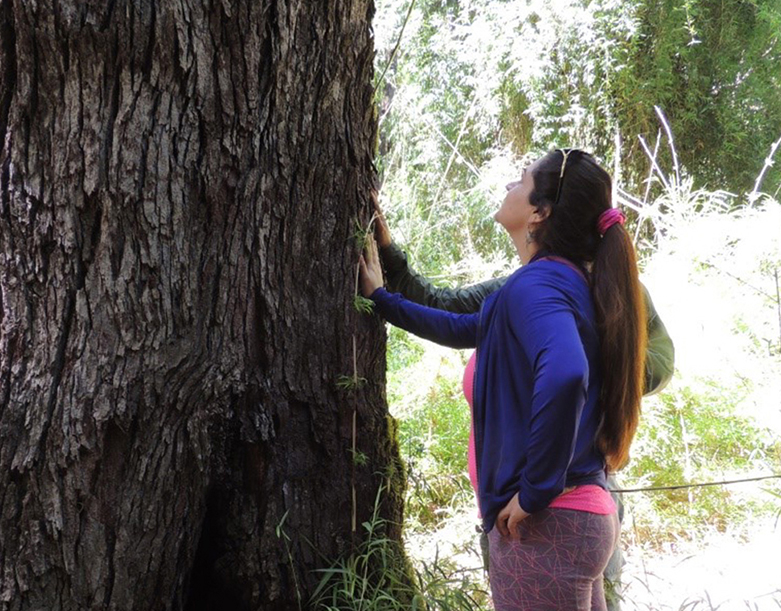 The forests of the Nonguén Valley, located on the outskirts of the city of Concepción, in Chile, create micro-climates favourable to the sustainability of the local watershed environment. They regulate the water cycle, contribute to the overall quality of the soil, and capture carbon dioxide, a greenhouse gas. But they can do more. Scientific literature suggests that forests can have positive effects on people’s mental health, particularly youth. Today, the Nonguén forests are threatened by increased urbanization and other detrimental human activities. In response to this problem, a team of women leaders, including a landscape architect/ecologist and a psychologist, created a special initiative that draws on the power of forests to promote youth mental health. Indeed, this initiative seeks to enhance both the mental health of a group of young people as well as their awareness of the importance of preserving the forests of the Nonguén Reserve.

The initiative was launched in January 2020, and 20 participants registered — mostly graduate students from the Universidad del Bío-Bío. Seven sessions were planned. Unfortunately, the implementation of the activities was inhibited by a series of challenges: a forest fire, the public health restrictions imposed to contain the COVID-19 pandemic, and the onset of a life-threatening illness in one of the project leaders. In the face of these contingencies, the workshop was shifted online. Surprisingly, the methodological framework planned for the onsite activities proved adaptable and successful in an online setting. This means that part of the initiative’s objectives were achieved via digital communications, in despite of significant restrictions.

The situation in the Nonguén Valley highlights the importance of safeguarding forests for watershed conservation. This local forest therapy initiative seeks to contribute to the conservation of natural environments by cultivating young people’s affective bond with the natural ecosystem. It rests on the implementation of a Shinrin-Yoku (SY) workshop, also named “forest therapy.” SY is a traditional Japanese practice that consists in mindfully using all five senses to immerse oneself in nature. SY surfaced in Japanese medicine in the 1980s as a pivotal component of preventive healthcare and healing. The practice has now reached other countries. As a result, different outdoor activities have been incorporated into publicly-funded therapeutic programs in a variety of settings. Scientific studies have proven that forest therapy modalities such as SY have benefits for human health and well-being, especially for boosting the immune system and mental health (see review by Hansen et al. 2017).

This SY initiative aims to encourage young people in the Nonguén community to come into closer contact with nature as a strategy for dealing with detachment and lack of awareness regarding forest conservation. The workshop shared knowledge with students on the following topics: Biodiversity of the Nonguén Forest, Forest Therapy, Shinrin-Yoku practice, and breathing and contemplation techniques. It was conceived as an eminently immersive activity. The main activity consists in a practice of guided observation, with an emphasis on a set of therapeutic experiences related to forest therapy. Six practical sessions were planned in the Nonguén National Park. The first centred on experiential activities central to forest therapy, such as contemplation, conscious breathing, and relaxation. The second, conducted in groups, consisted in creating a forest therapy experience for others based on the findings of the first session. The following sessions involved practicing the same kinds of exercises in pairs. The last session was a plenary discussion, where the participants presented their results to the group. A key principle was that this experience, once lived, could then be transferred to others.

A team of women — Soraya Bravo (project leader and head of local environmental organization Conserva Nonguén), Gabriela Iglesias (psychologist and Shinrin-yoku therapist), and Javiera Delaunoy (landscape architect) — began conceptualizing and planning the activities in January 2020. They planned seven sessions, including introductory talks and onsite workshops. They then divided the responsibility of moderating the workshops. Each planned the activities and materials for their respective workshops. The groundwork included the selection of spaces for onsite talks and trails for nature walks in the Nonguén National Park. It also included the preparation of audiovisual material (flipcharts, PowerPoint presentations, etc.). Conserva Nonguén oversaw the logistics, including transportation and food.

The team then disseminated a call for participants, hanging posters in busy local places such as schools, the public clinic, a few grocery stores, and the neighbourhood leaders’ meeting centre. They also posted the call to social media and featured it at a talk on Chilean forests. Candidates were asked to submit letters of interest. The team selected and invited 20 participants for the first workshop. Most of them were graduate students from the Universidad del Bío-Bío and roughly half had participated in other forest-related workshops with the organizers.

However, on the same day that the workshop was set to begin in January 2020, a forest fire broke out in the Nonguén National Reserve, causing the closure of the reserve. It was initially set to remain closed until November 2020. Unfortunately, a large part of the financial resources had already been spent on expenses such as travel, food, lodging, and materials. Further restrictions imposed at the onset of the COVID-19 pandemic in March 2020 led to the closure of the reserve for an even longer period.

However, in August 2020, the leader of this initiative organized an online workshop titled “Therapeutic Forest: theoretical, methodological and practical bases” for the closing event of the “Vive tus parques” program, organized by the National Forestry Corporation (CONAF) and the National Youth Institute (INJUV). More than 300 young people participated. The leader gave a general introduction to forest therapy and conducted a guided meditation/contemplation exercise, inviting participants to focus on the natural objects they had around them. The participants’ positive evaluation of the online activity indicates that part of the objectives of the forest therapy project — namely, those related to guided observation and visualization experiences — were achieved. When the reserve finally reopened to the public, almost a year later, another workshop was planned for October 2021. This time however, the initiative was stalled again as Soraya Bravo, the project leader, was diagnosed with a life-threatening illness. Since in-person experience is irreplaceable for the project objectives, the organizers decided to wait until it was possible to meet onsite, opting not to use remote communication channels.

The team of women leaders ensured thorough preparation for the workshop and onsite activities. Strong ties of friendship exist within the team, which has helped ensure good communication throughout the process and has upheld a high level of momentum. Universidad del Bío-Bío researchers, affiliated with ADAPTO, provided the funding and contributed to the preparation and dissemination of the activities in the university. The women leaders facilitated the onsite workshops. The National Forestry Commission provided the space in Nonguén National Park where the activities took place. Local organizations such as schools and the community library collaborated with the dissemination of the call for participants by advertising it on social media.

Despite the high level of coordination and preparation, the incredible number of unforeseen circumstances forced the suspension of the workshop series. Recent attempts to bring it to completion were foiled once again by the project leader’s severe health issues. She however remains as committed as ever and the project’s implementation now depends on her post-treatment recovery.

The stakeholders and participants in this initiative faced considerable challenges: first, a forest fire broke in the reserve; followed by the global health crisis; and finally, life-threatening health issues affecting the project leader. Nevertheless, the project succeeded in accurately capturing community needs with respect to climate change adaptation. This success may explain the project’s excellent reception among young participants as well as their sustained interest in the workshops, despite repeated rescheduling. Therefore, we may conclude that forest therapy could be one of the cornerstones for future forest protection initiatives.

In the face of the numerous challenges listed above, the project leader began to consider an online alternative. She did not by the same token anticipate that it could replace the original onsite experience. She essentially adapted some of the planned onsite activities to an online format. The feedback from the 300 young Chilean participants was extremely positive, which surprised all the team organizers. The team learned that there are certain aspects of the project that can indeed be implemented and certain objectives that can be achieved in an online format. This insight may prove useful for future initiatives, whether they are implemented in uncertain times such as these or in more normal circumstances.

Despite all the difficulties faced in the implementation of the project, Soraya Bravo believes the participants have remained interested. One of the reasons is that the pandemic and related social distancing measures have exacerbated mental health issues such as anxiety and depression. Consequently, they have emphasized the need for stronger bonds with nature. Soraya Bravo remains committed to leading the pending onsite activities as soon as her health permits.