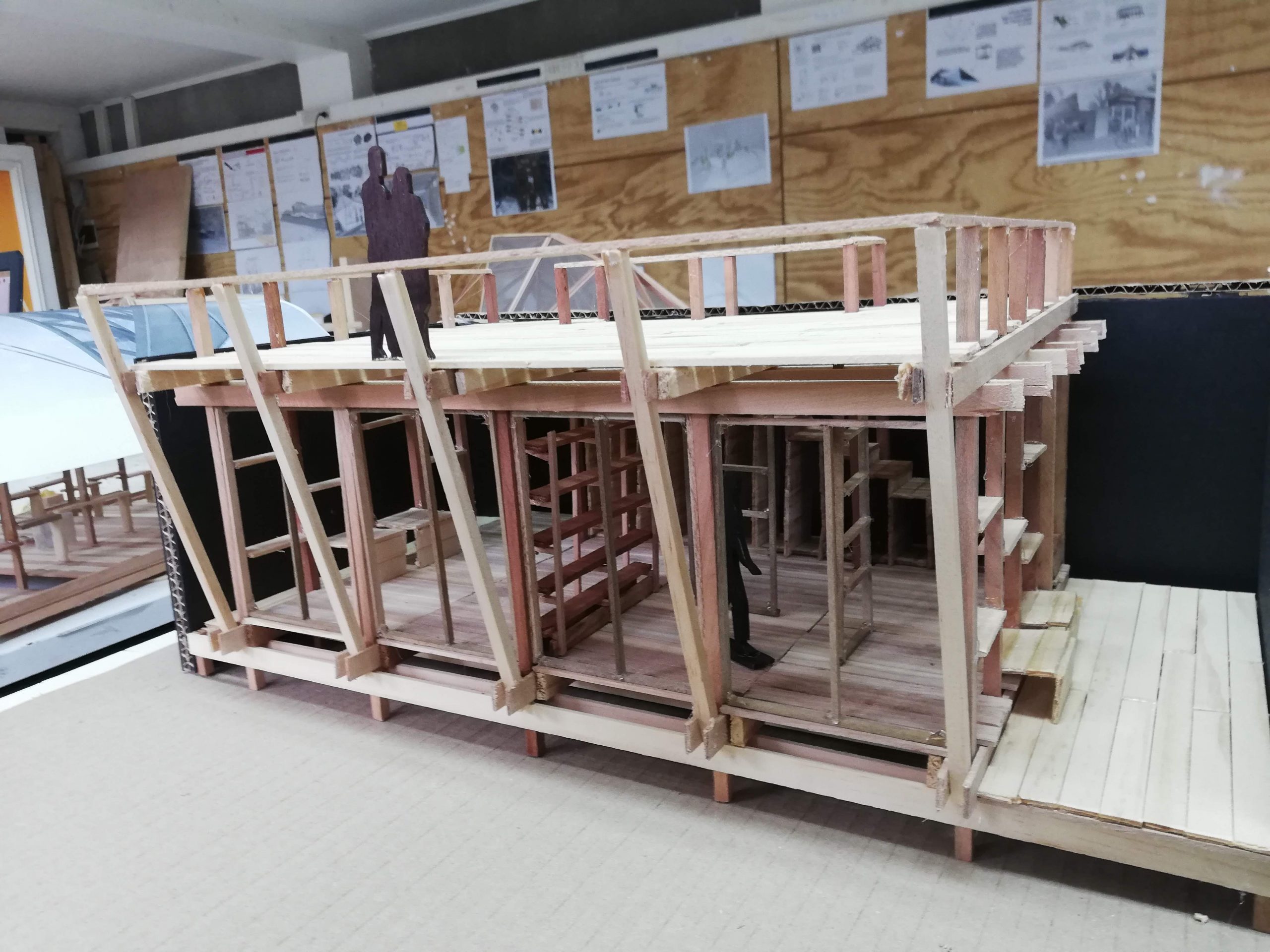 The urban garden initiative aimed to promote the food-related activities that already existed at the foot of Copihues Street, located on a slope in the Nonguén Valley, near the city of Concepción, Chile. The design for the initiative was selected by the residents of Nonguén, among a group of student projects created as part of the Neighbourhood Workshop at the Universidad del Bío-Bío. Following an exhibition held in 2018, the residents selected a design by first-year student Constanza Rojas. However, the organizers soon decided to shift the garden to a different site in the interest of reducing construction costs. The university-led initiative then faced major obstacles: first, the 2019 waves of social unrest in Chile, and then, the onset of the pandemic in 2020. These obstacles made it impossible to carry out onsite visits and work with the community. They ultimately resulted in the cancellation of the initiative and the transfer of funds to the neighbourhood council, for the realization of a project of their choice. Despite the failure to implement the urban garden plans, the new partnership between Nonguén residents, the Universidad del Bío-Bío, and the municipality of Concepción remains strong. All parties are committed to improving living conditions in Nonguén. Despite the difficulties, it is clear to us that tripartite alliances between academia, civil society, and local government can facilitate relevant, necessary, and feasible projects.

Description and evolution of the initiative

This initiative started with the 2018 Neighbourhood Workshop, a multidisciplinary studio that takes place every second semester at the Universidad del Bío-Bío in Concepción, Chile. The workshop’s main objectives are to work with the neighbouring communities of the university campus, to respond to their immediate needs, and to help create a shared vision for a future university neighbourhood in the area. So far, each version of the studio has involved an in-depth study of the Nonguén area and its architectural and urban needs. Students from the School of Social Work, with whom we form a partnership, developed participatory diagnostic strategies for fieldwork in the neighbourhood: namely, strategies for approaching communities through in-depth interviews. Based on that initial contextual assessment, students from the School of Architecture worked on various design proposals, including urban gardens, local libraries, mini-markets, small squares, children’s playgrounds, lookout places, and neighbourhood committee offices. The students presented these proposals in an exhibition, where Nonguén residents could vote for the designs that best matched their desires and needs. The residents chose the project developed by first-year student Constanza Rojas, titled Urban Garden, during a meeting at the end of 2018.

Constanza’s project aimed to showcase the informal food-related activities that were already being conducted at the foot of Copihues Street in the Nonguén Valley. The street is located on a hill. The urban garden project aimed to make use of a vacant site with access to the hill, that was covered by vegetation and leafy trees, and was already being used for gardening activities. It also aimed to take advantage of the hill’s height to create garden terraces, a meeting point, a market stand, and a botanical training centre. The project included composting, an activity promoted throughout the community by the Department of Environment of the Municipality of Concepción.

Once the project had been chosen by residents, local leaders and university teachers decided to move the project to the edge of Nonguén River. Moving the project would reduce the technical complexity and the additional costs involved in building on a slope. Those costs were too high for the level of funding available. Researchers also believed that the project could revitalize the riverside area, abandoned along most of the Nonguén River’s length due to poor urban development strategies. Residents and representatives of the Municipality of Concepción decided the precise location for the project after several fieldtrips at the end of 2018. The initiative also aimed to build on the experience of the Vertical Garden in the Bellavista neighbourhood by replicating the design and building strategies.

In normal circumstances, this project would then have been further developed in line with the Neighbourhood Studio philosophy: that is, through a codesigning process with local leaders and neighbours, as well as with an emergent architectural firm. Many undergraduate students would have helped via an internship scheme, and ultimately, the project would have been built.

Unfortunately, several events impeded the completion of the subsequent phases of the initiative. First, the social unrest in Chile in early October 2019 caused many difficulties, including interruptions of classes and meetings due to the constant demonstrations on the university campus. Many activities were postponed. In 2020, the pandemic hit and delayed the activities even further. At this stage, the project remained at the draft stage, typical for first-year students. Given the circumstances, researchers from the Universidad del Bío-Bío decided to put the project on hold and divert the funds to the neighbourhood council for the implementation of an initiative of their choice (which could include this garden project).

While the project was on hold, the foundation was laid for its future as well as that of other initiatives. Representatives from the Universidad del Bío-Bío, the Nonguén Valley residents’ association, and the municipality of Concepción formed a technical committee. This committee supports the previously established alliances between local government, local leaders, and the Universidad del Bío-Bío. It also explores the actions necessary to implement the urban garden initiative in the near future. The committee’s mandate includes field visits and joint selection of the new site for the urban garden, with neighbours (members of the Neighbourhood Board), municipal representatives (representatives of the Hydraulic Works Department), and members of the ADAPTO team. It is also committed to working jointly with representatives of the local Department of Environment, which is in charge of the “Composters and Organic Gardens” program. The program aims to reduce the volume of organic waste in the municipality of Concepción, as it generates greenhouse gases.

We hope to be able to build the Urban Garden project as soon as circumstances are favourable and new funds are available. Following a meeting with the ADAPTO team at the end of 2018, the mayor expressed his direct support for the project. His statement of support still holds.

The School of Architecture and the School of Social Work at the Universidad del Bío-Bío, the Department of Environment of the Municipality of Concepción, and the local neighbourhood committee established a cooperation agreement in 2016. The alliance aimed to secure a working partnership in the Nonguén area for future projects. The activities of the initiative’s first phases were jointly led by all the stakeholders of this partnership (Fig. 4). The collaboration was successful because the team managed to hold onsite and offsite meetings where ideas and potential projects were thoroughly discussed.

It is worth mentioning that the mayor and other municipal stakeholders supported the construction of the garden from the very beginning, mainly due to the project team’s close collaboration of many years with the neighbourhood council. The collaboration reinforced the initial momentum. From a pedagogical point of view, this kind of support and commitment is remarkable, considering that the initiative in question is the result of the work of a first-year student.

Although the development of this project was hindered in its early stages, it is clear to us that the tripartite alliance established between representatives from academia, civil society, and the local government can promote relevant, necessary, and feasible projects. The agility with which we carried out the initial steps toward the development of the project showed us that this type of association — based on recognition, respect, and mutual trust — can strengthen teamwork and enhance action. We believe the relative success of the project can be attributed to the sustained nature of the partnership we established with other local stakeholders. Our commitment to this partnership stems in turn from our recognition that we share a common territory. Hence, with our unconditional commitment to work in the area for an indefinite period, we believe we can help co-create a vision for a future university neighbourhood. Our commitment found a deep echo among residents of Colihues Street. Within academia, these kinds of long-term commitments to a territory are rare. The trend used to be to improve a different area each semester. However, it is said that this mode of working leads to a loss of trust in academic endeavours on the part of local communities. The trust forged through our alliance with the neighbours means that even when the urban garden project was put on hold, the relationship stayed strong, because they knew that the will to work together was real and that things would come to pass when the time was right.

The team hopes to resume the work on the urban garden and reactivate the neighbourhood workshop, which has been dormant due to the pandemic. In the second term of 2020, third-year students worked on proposals for additional pedestrian walkways over the river, thus following up on an idea that had emerged during one of the joint visits between representatives of the ADAPTO team at the Universidad del Bío-Bío, neighbourhood residents, and municipal delegates. This idea consisted in combining the two initiatives — the pedestrian walkway and the urban garden — so that both could be enhanced. In this way, the urban garden could be located at one end of the walkway, thus helping to enliven the otherwise rather abandoned riverside area.

The project component most worthy of replication is undoubtedly the work in multidirectional or tripartite alliances. The ADAPTO Chile team has written and published several articles on this topic (Bisbal et al. 2018; Araneda et al. 2019a; Araneda et al. 2019b; Araneda et al. 2021). The challenge, we believe, is to commit to establishing and maintaining a relationship akin to a friendship with a community: it involves demonstrating interest in a common, higher objective of co-creating and co-building neighbourhoods. So far, the results show that all parties involved in this ongoing alliance/conversation acknowledge an improvement in the way they practice and value their work. Everyone wins: academia gains a real territory in which to ground educational endeavours; the local government acquires a substantial portfolio of ideas to develop the area; and the community gains a vision of a possible future that they simply did not have thus far. We believe that our six years of work in the Nonguén area can inspire further work here, as well as in other cities in Latin America.