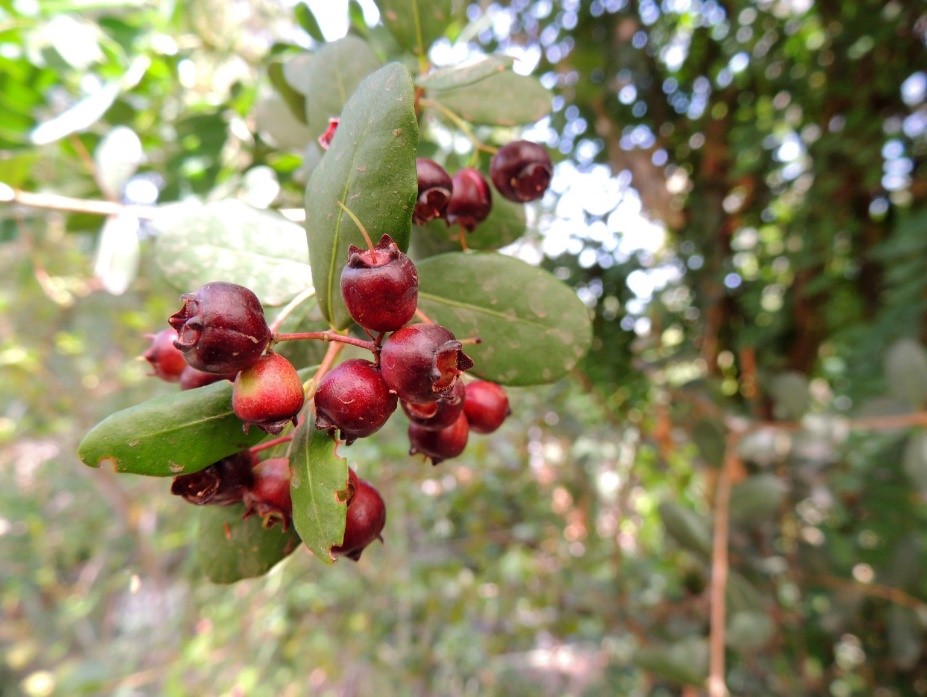 In this initiative, women from the Nonguén Valley delivered trainings on botanical illustration for fellow women residents. Illustrating flora is a way for local residents to connect with the beauty of watershed forests. Moreover, through their drawings, residents can showcase the forests’ critical importance for water supply in the city of Concepción. The forests of the Nonguén Valley are increasingly threatened by human activity. The workshop was intended to take place over eight sessions, beginning with an initial walk along the river and leading to a series of observation and drawing sessions. The project is currently on hold due to several crises unfolding in the country. It is expected to resume in Spring 2022. The women leaders’ commitment to ensuring the activities’ implementation, despite the numerous challenges encountered, strengthens our belief in the relevance of art in disaster risk reduction and climate action.

Natural forests are especially important in watershed environments because they regulate water cycles and micro-climates, creating favourable natural environments for water to continue flowing in streams and rivers. However, watershed forests are currently under threat. In Concepción, the Nonguén Valley and the Nonguén National Reserve are home to the last relics of deciduous forest in the region. This reserve is also the region’s main water source. Despite its biodiversity and heritage value, it is at risk of being destroyed by fires, water pollution, illegal deforestation, and urban sprawl. At the source of these threats are the community’s and powerholders’ lack of knowledge about the local flora of the Nonguén Valley and National Reserve. This lack of knowledge translates into a lack of appreciation for the importance of preserving the forest ecosystem.

This initiative on botanical illustration is led by Soraya Bravo, the leader of local environmental organization Conserva Nonguén, and is intended for women of the Nonguén Valley. The leaders of the project believe that women’s perspective on and relationship with nature has traditionally been ignored by male-dominant governance and administration. Botanical illustrations generate an aesthetic and realistic representation of the natural world. They have proven to be an effective method for disseminating knowledge on natural sciences and revealing the beauty of plant species (see Fig. 1 to 5, and 7). The very act of illustrating is one of care, appreciation, and contemplation. For the illustrator, it implies developing a sensitive relationship with the natural environment. In the current socio-health context, nature is more than a source of material resources: it is a vital asset for physical and mental health. Botanical illustrations can help document the unique Nonguén ecosystem and, if disseminated, help protect it. Indeed, they can serve as a tool for changing the community’s opinions, behaviours, and relationship with the vital watershed forests.

The leader planned the workshop to take place over eight sessions. On the first day, a morning walk along the stream in the national park would help develop the participants’ awareness of the landscape and ecosystem in which they live. This walk would be followed in the afternoon by drawing exercises led by two of the project leaders. On the second day, participants would complete onsite observations. The remaining six days were set aside for participants to work on their own drawings with the support of mentors. These activities are currently on hold because of the ongoing global pandemic, social unrest in Chile, and fires in the valley (see the following section for further information). The resulting illustrations were due to be published in a catalogue and printed on T-shirts, mugs, and other items.

The leader of the initiative first initiated a series of preparatory activities, including identifying areas of interest, defining an itinerary, and planning the workshop sessions.

Unfortunately, the botanical illustration workshops did not take place due to a series of unfortunate events that unfolded after the funds were received. First, a major forest fire at the end of January 2020 destroyed parts of the reserve and damaged the bridges necessary for accessing it. As a result, both the road and the reserve were closed until March 10, 2020, for the time needed to repair the road infrastructure. Shortly after, the COVID-19 pandemic broke out and the government enforced restrictive containment measures, which prevented teachers and the 20 students from accessing the reserve or gathering within it. When restrictions eased, people still refrained from gathering, as they continued to be attentive to the ongoing health risks associated with meeting (Fig. 3, stage 7).

In the meantime, leaders and participants have continued to demonstrate genuine interest in the project. Unlike the leaders of other ADAPTO initiatives, the botanical illustration project leaders judged that moving the in-person workshops onto digital platforms was not appropriate. The loss of direct contact with nature, and specifically with the unique flora at the source of the Nonguén stream, would prevent the creation of the human-nature link that motivates the conservation of the forest and its watershed. They feared that shifting the workshops online would represent a missed opportunity for participants to attune their sensibility to the surrounding landscape. Likewise, the meticulous technique used for illustrating with polychrome pencils is difficult to learn: it requires intensive hands-on training and close contact between teachers and participants. The project leaders therefore decided to wait until the activities could be safely carried out. The activities are now scheduled for March 2022.

Local organization Conserva Nonguén played a leading role in the initiative. They designed the workshop, managed its logistical aspects, and evaluated its pertinence within the community. Soraya Bravo, the main leader of the organization and the initiative, sought and found the experts to carry out the workshop. Together they selected the area where the workshop was going to take place, devised a dissemination strategy, and invited a group of 20 local women to participate in the workshop.

The ADAPTO team, based at the Universidad del Bío-Bío, assigned the funds after a review process. They also supported the organization in the implementation process.

Many other actors supported the initiative. CONAF (Corporación Nacional Forestal) committed to guide the walks in the National Park. Camino del Agua Spa, a spa and conference centre located at the heart of the Nonguén valley, offered to lend a space for an exhibition of the final works. Finally, the Küme Mongen Environmental Education Centre, a local organization that works on environmental education projects in schools, committed to provide space for the drawing sessions.

So far, the project has been planned in great detail. The leaders have completed a recognition walk, identified species to be drawn, planned a route, and identified a group of women participants. A calendar of activities has been made, and the duration of the workshop has been fixed. It is expected to take place in Spring 2022.

In the new global and local socio-health context, connection with nature is commonly recognized as an important source of physical and mental health, especially for women. We believe the workshop’s enduring relevance is manifest in the fact that the group of interested women have remained committed to completing the initiative, despite all the challenges encountered. They have frequently inquired about the dates of implementation. We believe this outcome is proof that when activities are pertinent and necessary, they stay with the community — even if they must remain in the form of a promise for a long time.

Moreover, from the point of view of architectural education, our experience so far leads us to believe similar initiatives could be pertinent in academic contexts. Indeed, they could help students develop a deeper sensibility for the natural environment as well as for the built one.

The project is expected to be implemented in Spring 2022. It will consist of the abovementioned eight sessions, expanded for a period of roughly eight weeks. The leaders aim to continue the initiative with a stable group of illustrators from Nonguén. They will print their illustrations on a variety of items, such as postcards, mugs, and T-shirts.