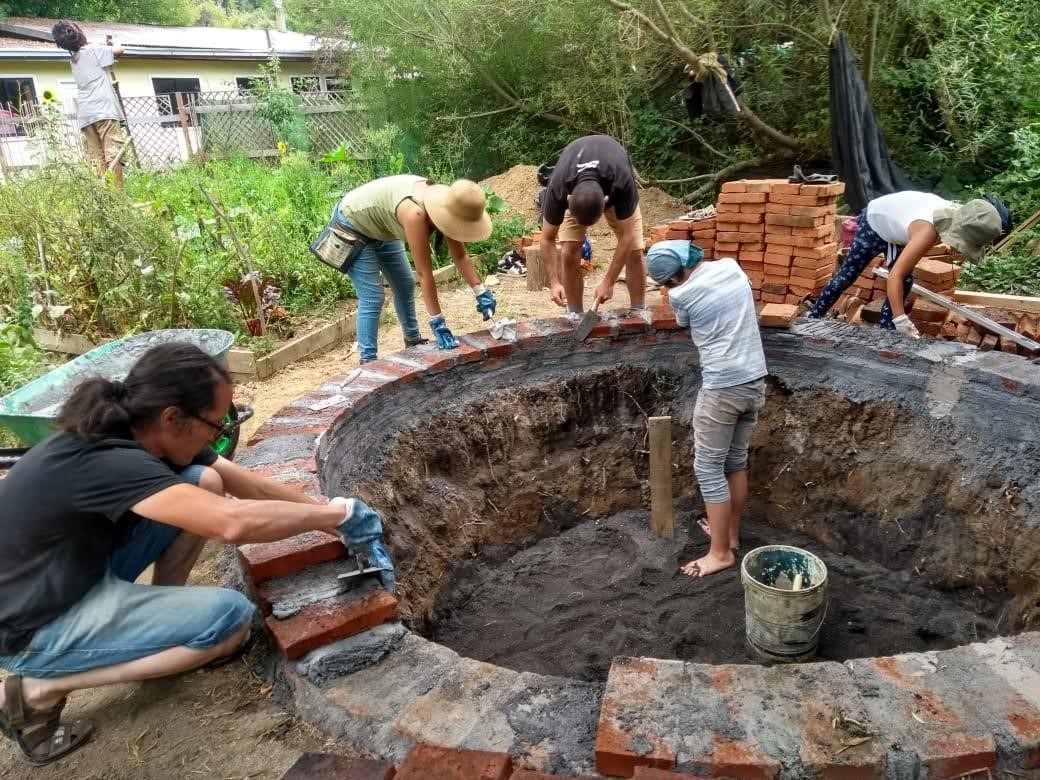 The Nonguén estuary in Concepción, Chile, is heavily urbanized. It is subject to considerable levels of pollution, caused by waste and untreated greywater. In contrast, water is a scarce resource in the area, as droughts have become more frequent due to climate change. In an effort to raise environmental awareness, reduce pollution, and improve locals’ living conditions, a group of women involved in garden activities at the local elementary school built a “worm filter,” that is, a biological system capable of treating greywater with living worms and wetland plants. The community-led initiative aimed to demonstrate how greywater could be treated, recycled, and used for the irrigation of a community garden. The group of women also redesigned the existing vegetable garden to integrate permaculture and provided training to enable community members to participate. The construction of the filter was organized through voluntary collaborative work sessions, known as “mingas.” Unfortunately, the nationwide popular demonstrations of October 2019 and the COVID-19 pandemic considerably decreased participation in the activities. The filter is however nearly completed and is expected to be operational soon. One main lesson drawn from the experience is the importance of establishing and promoting good communication among participants, to better sustain community participation and reduce misunderstandings when facing contingencies.

The Nonguén river in Concepción, Chile, could justifiably be described as a neglected body of water. In an attempt to contain potential floods, the local government resorted to build a two-kilometre-long concrete barrier on both sides of the riverbed in one of the most populated areas of the valley. This engineering strategy arguably reduces flood risks, but it also elevates velocities and discharge of water, increases levels of erosion and sedimentation, reduces in-stream cover, and decreases allochthonous input. It also removes most natural elements from the body of water — trees, sand, stones, and even wildlife — and thus creates a barren landscape. Moreover, several informal settlements located along the water are not connected to the sewage system. As a result, the estuary receives untreated greywater and waste of all kinds.

In response, a group of women involved in garden activities at the local elementary school built a “worm filter,” that is, a biological system capable of treating greywater with living worms and wetland plants. The community-led initiative aimed to demonstrate how greywater could be treated, recycled, and used for the irrigation of a community garden. The community-led initiative aimed to simultaneously reduce water pollution and enhance food autonomy by growing food with recycled domestic water.

With the help of the school garden community, the group of women designed and built the “worm filter” in the existing vegetable garden of the Waldorf School, adjacent to the estuary. It consists of a pond bordered by bricks and composed of gravel, a geotextile membrane, living worms, and wetland plants (Fig. 1, 2, and 7). The garden is already an important feature in the school’s curriculum, as it provides opportunities for practical work for the education of children as well as food for the teachers, parents, and neighbours. The worm filter was designed to demonstrate to children and the nearby community how local food production can be enhanced by greywater recycling processes. One of the mothers, Katherine Inostroza, who is also an active member in the school community, led the construction of the filter. She relied on the guidance of two other women experts in biofiltering techniques.

These two experts — a teacher at the school and a researcher at EULA, an environmental science centre located at the Universidad de Concepción — also offered training in permaculture (Fig. 4 and 5). Permaculture is an approach to land management that reproduces phenomena observed in flourishing natural ecosystems. It was originally developed by Bill Mollison and David Holmgren in response to industrial approaches to agriculture. The contribution of skilled specialists in biological water treatment techniques and permaculture strengthened the motivation of schoolteachers, parents, children, and residents to adapt the school garden for permaculture.

The initiative was implemented in three main phases. The first stage began in August 2019 with initial training on permaculture and recycling practices by an expert on these topics (Fig. 3, 4 and 5). Then, community “mingas” (i.e., collective work sessions with members of the school garden community) excavated a hole and laid bricks around the pond (Fig. 1, 2 and 7). Participation and momentum during that period was high, until October 2019, when the nationwide popular demonstrations caused a decline in attendance to the “mingas” (Fig. 6).

The second phase started in December 2019 and involved filling the excavation with two layers of gravel of different sizes and the installation of a high-density membrane. Community participation during this stage was much lower and the work schedule had to be changed due to the lockdown imposed as a precautionary measure against the COVID pandemic. Despite the sanitary restrictions, a small group of people, mainly school parents, continued to meet on a regular basis to continue the work. At the end of this stage, in October 2020, the worm filter was nearly completed, with only a layer of sawdust still missing.

In the process, the leader of the initiative organized a presentation titled “Community and nature-based water solutions,” featuring the two abovementioned experts who had been involved in the building of the filter. These two experts also delivered a four-session training program to the school community on building and preparing an optimal worm farm. The school families formed a garden team and implemented a bed crop sponsorship scheme.

Finally, the third and still pending phase consists in introducing Californian earthworms and wetland plants. The school community will then connect the worm filter to the school’s greywater sewage and manage the irrigation of the garden with the filtered water.

Women have led the project throughout all the phases (Fig. 6). Katherine Inostroza, a mother and an active member of the independent pedagogical project “Entorno Educador del Valle Nonguén” (focused on school garden activities), organized, promoted, and carried out the activities with the supervision of the two women experts in biofiltering techniques. All along, the participation of the school garden community, composed mainly of mothers of children at the school, and at times, of the community at large (for example during days of parent meetings or seasonal celebrations), has been crucial to the implementation of the project. The broader group comprised residents, current and previous school parents, schoolchildren, and other long-standing supporters of the school garden activities. This community participated in all the informational and educational activities related to the biofilter. Members played a key role in the construction of the filter. Without them, the building of the filter would simply have been impossible. The Universidad del Bío-Bío acted as a sponsor, contacting local leaders, and financing the proposed initiative with the ADAPTO funds. It is expected that the filter will be completed within the budget.

The participatory approach strengthened ties in the school community and reinforced relations between participants, friends, residents, and men and women of different ages from the Nonguén community. As a result, collective synergies were created within the school community. These synergies are reflected in the sustained momentum and the collective “mingas,” the awareness of the responsible use of water, and the conservation of the water resources in the territory. This said, it is also important to mention that miscommunications occurred between and among leaders and participants at several points during the implementation process. At crucial moments, this lack of clarity and openness generated avoidable conflicts that took a heavy emotional toll on the individuals involved.

We realized the importance of making clear and sustained commitments during the pandemic. Many people abandoned the work midway after the declaration of the pandemic without properly communicating their decision to the wider group. This had a heavy emotional impact on those left with the task of finishing the project. It is therefore important to promote and cultivate a practice of clear and open verbal communication throughout the implementation. At crucial moments, the absence of such practice generated avoidable problems, such as disputes and money-related issues.

The work was hard, and it extended over a long period of time. The lack of a regular and permanent workforce delayed the completion of the initiative beyond the expected timeframe. This situation made us realize the importance of translating good intentions into pragmatic solutions in the context of community-based initiatives: in this case, for example, it would have been beneficial to complete a feasibility study before beginning the construction of the worm filter.

Despite the issues mentioned here, the initiative had an impact beyond the school community. Several people who had heard about it visited the school in the hopes of replicating the idea in their own neighbourhoods.

This initiative was designed to provide an example for the Nonguén community on how to build biofilters, reduce water pollution, and improve living conditions near the Nonguén estuary. It also provided the opportunity for surrounding communities to learn, participate in the garden, and replicate the strategies in other spaces. In the long term, it is hoped that the implementation of small-scale vegetable gardens with biofilters will promote food autonomy and raise awareness on water conservation. As such, the initiative is expected to serve as a reference for future projects in the area and beyond.