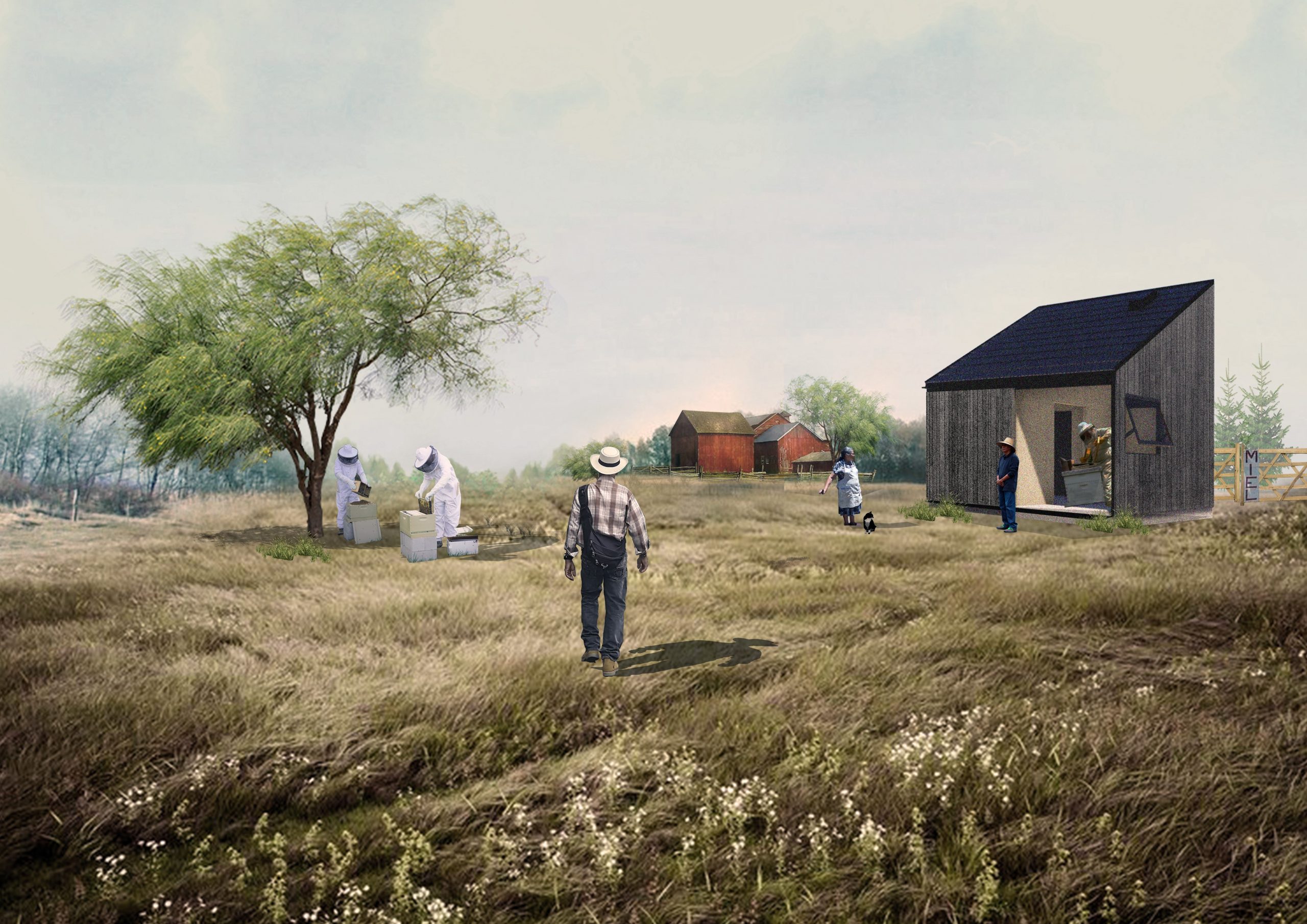 The village of Quinchamalí, Chile, is recognized for its intangible heritage in pottery craftmanship. However, an analysis carried out by architecture students from Universidad del Bío-Bío revealed that pottery production and tourism are being weakened by the lack of bespoke workshop infrastructure. This initiative aims to consolidate, showcase, and empower the productive capacities of craftswomen, mainly through the design of additional micro-spaces of artisanal production and trade. The initiative arises from the “Neighborhood Workshop”, an architectural studio where students provide design solutions to societal challenges through constant conversation with communities, and where selected projects get improved and implemented through partnerships with professionals. In this initiative, the implementation of prototypes of craft workshops is the result of collaborative work between artisans of Quinchamalí, the “I Love My Neighborhood”(QMB for Quiero Mi Barrio) program of the Ministry of Housing and Urban Development, the Housing and Urban Development Service (SERVIU), the architectural firm Azócar & Catrón, and the School of Architecture of the Universidad del Bío-Bío. A significant result is the ongoing formalization of an alliance between the community, state institutions, and academia to develop collaborative and inclusive approaches to infrastructure development policies responding to the needs and opportunities of rural localities in the Ñuble region.

Quinchamalí, a village of 1.300 souls in central Chile (Fig. 3 and 4), is recognized for its intangible heritage in woman craftmanship, particularly in pottery. Craft production is however in decline and the village does not attract enough tourists to sustain the livelihoods of the woman artisans. To help alleviating the problem, the Ministry of Cultures, Arts and Heritage has recently put forth an urgent application for the craftswomen’s production of Quinchamalí to the list of the Safeguarding List of Intangible Cultural Heritage to UNESCO. This initiative aims to consolidate, showcase, and empower the productive capacities of craftswomen in Quinchamali, mainly through the design of additional micro-spaces for artisanal production and trade. The initiative arises from an alliance between the “Taller de Barrio” (Neighborhood Workshop) of the Universidad del Bío-Bío (UBB), the municipality of Concepción and the “Programa Quiero mi Barrio” (PQMB, I Love My Neighbourhood Programme). An analysis carried out by architecture students from UBB indeed suggests that craft production and tourism are being weakened by the lack of bespoke workshop infrastructure. The design challenge is hence twofold: on one hand, the new bespoke workshops should foster the artisans’ skills and production, and on the other, they should consolidate a coherent landscape with new, iconic and readily identifiable architectural objects that could attract and guide visitors in the village. By acknowledging and honoring woman artisans’ practice and by gifting them a bespoke project worth of their efforts, the alliance wants to enhance women artisans’ sense of worth and to maintaining a tradition based on pure talent and selfless devotion.

The project was realized in two phases. In the first phase, the students of an architectural studio “Taller de Barrio” (Neighborhood Workshop) at the Universidad Bio-Bio (UBB) developed a series of prototypes. The Neighbourhood Workshop is a yearly architectural studio taking place every second semester of the academic year where students develop projects in real-life contexts aiming to solving societal challenges in collaboration with communities. For each prototype, the students studied in situ the ways and the space in which artisans produce and trade their craft. The design process consisted of a constant dialogue between UBB students, artisans and QMB professionals, sustained by regular group visits to the village.  Having developed one project per student, in the end, the architectural studio yielded 12 distinct proposals of workshop prototypes for craft production and trade, all of them selected by the artisans.

In the second phase, the community and the professionals from the “I Love My Neighborhood”(QMB for Quiero Mi Barrio) program of the Ministry of Housing and Urban Development jointly selected the architectural proposal of the student Benjamín Alvarado for further design development and implementation by an architecture firm. Following a grant application process (currently pending), Azócar y Catrón, an architecture firm ran by former UBB students, transformed the microproject considerably. It resulted in four variations of a basic module for pottery, jam, honey and poultry production and trade (Fig. 1, 2, 6 and 7). This process is further explained in the following section. At this stage, the architecture firm adopted a more traditional approach to architectural design and transformed the student’s original design to the point of being unrecognizable.

At the end of the UBB Neighborhood Workshop and the selection of Benjamín’s proposal, a group of six students participated in the further development of the chosen project as “students in practice”. Azócar y Catrón offered the necessary technical support to transform Benjamin’s design proposal into a feasible project. This required a series of negotiation meetings to take into account the needs and interests of the community. Then, PQM partners and a representative of the regional office of the housing ministry applied for public funding at SERVIU, the Services for Housing and Urbanization, in the form of a rural housing subsidy. This phase was of great momentum (Fig. 5), as the work of architecture students from the Neighborhood Workshop was complemented with the active help of professionals from the different public agencies involved. The contribution of Javiera Vicario (SERVIU) is especially acknowledged, as she informed about the existence of subsidy funds granted by the ministry to which one could apply.

One of the funding requirements was to involve community members in the application process. Twelve residents that fulfilled the application requirements established by SERVIU were selected by the SERVIU team. The interesting outcome of this process was that the group that made it through the selection process was not only composed by pottery artisans but also by small jam, honey and poultry producers. We carried out another participatory design process in order to obtain new feedback from the beneficiaries. This entailed the development of an architectural proposal that was adaptable to the different kinds of production and trades. This collective work from the alliance between UBB, Azócar y Catrón and PQM partners eventually yielded a portfolio of four architectural variations that were fully developed for the funding application. The process of submission of the portfolio to the municipality and its eventual approval was time consuming and slow. Nevertheless, the application was submitted in time for the funding application in 2021 and is currently under evaluation by SERVIU. The evaluation is also being delayed by both, the national social contingency and the sanitary crisis.

As mentioned, the initiative resulted from a novel threefold alliance between Universidad del Bío-Bío and its Neighborhood Workshop architectural studio, the municipality of Concepción, and the national program “Quiero mi Barrio” (QMB, I Love My Neighbourhood) who in turn work hand in hand with the neighbours, hence our alliance with them as well. (Fig. 3). The partners signed a mutual cooperation agreement in 2015. The alliance bridges the persistent gap between academia and local government and establishes an intersectoral cooperation and mode of project governance. The drive to work within the alliance was acknowledged by Quinchamali residents and QMB program professionals alike to be an unprecedented and productive way of working. It contributed to forging good relationships among stakeholders and, consequently, to achieve results that are both pertinent and wholesome for each partner.  This collaborative process however came with challenges, such as resulting in a slower project process. Furthermore, the constant collaboration and communication within the alliance, for good or bad, was not always achieved. The already complex and lengthy funding application process contributed many bidirectional conversations between the office and the QMB program where the university and the municipality eventually cease giving feedback.

In this alliance, the School of Architecture of the Universidad del Bío Bío and its ADAPTO project team (composed of architecture and social work tutors and students) took a leadership role in the Neighborhood Workshops. Students and professors alike participated in the need assessment for the community of Quinchamalí with QMB professionals, and in the design of the various proposals. In return, the students – particularly the six “students in practice” – benefitted from a real-life scenario where they did not only become mere designers but also actors and mediators in constant dialogue with citizens and local government representatives.

In the further development of the selected proposal, the architecture firm Azócar y Catrón assumed a traditional professional role, deciding on the main design principles and then giving instructions on how to complete the design. The students Constanza Jara and María Constanza Sáez became interns in the architecture firm and continued working in the development of the workshop prototypes. This resulted in a great transformation of the selected design developed by Benjamin Alvarado. Professionals from the QMB program acted as active collaborators and consultants for the ADAPTO project team throughout the project. The Neighborhood Recovery Program “I love my neighborhood” of the Ministry of Housing and Urbanism (Minvu) was born in 2006 as a way to improve the quality of life of people through a participatory process that involves the municipality and the community itself benefited, thus allowing the recovery of public spaces, equipment and the strengthening of the social fabric. They organized a number of joint meetings and guided the activities of the UBB architectural studio in accordance with the QMB program’s own development policies. Once Benjamin´s Alvarado´s project was chosen, they led the application for subsidy funds.

The project proposes a rather novel approach for collective work between academia, public service institutions and the community based on what we term multidirectional or threefold alliances as an outreach strategy. Constant collaboration and coordination throughout a project process between all stakeholders of a newly established partnership is however essential. Doing so ensures that the alliance fulfils its purpose both, as an innovative collaborative work strategy and as a result of this, as a governance precedent. We learned that as soon as conversations and meetings cease for a prolonged time period, miscommunications would immediately arise. The consequences being the building up of mistrust. Mitigating this situation requires at least one person who can perform a complete and systematic follow-up of the whole process. This presupposes that resources must be allocated for this specific task from the beginning of the project.

The integration of an architectural office for the technical development of a design project without involving the students who created the design can have multiple impacts from a pedagogical point of view. In this case, unlike the design process of the vertical garden in Bellavista (see “Our seeds are life”), the student’s original design was transformed to the point of being unrecognizable due to a more traditional one sided approach taken by the Azócar y Catrón office. This can be acceptable as long as the student is actively and empathetically incorporated into the design process, which was not the case in this project. This learning also implies that tutors should consider the technical complexity of a student proposal when the selection process takes place, since a more complex proposal can bring significant problems in the technical development phase.

Future actions depend on financial support. As mentioned, the project is being assessed for a subsidy for its implementation in Quinchamali. It is expected that the project will move to the construction phase following the reception of the subsidy. Providing additional financial support, the architectural proposal of four variations of a single basic module for craft and food production and trade (pottery, honey, poultry and jam) can also be further adapted to other small-scale productive activities and replicated in Quinchamali.

Such threefold or multisectoral alliances can be relevant in other regions. ADAPTO partners at the Universidad Bio-Bio believe the Quinchamalí experience to be just a glimpse of the potential ways of engaging with the public sector and residents in future projects. It can bridge the collaborative, conversational and research gaps existing between the academic world, the governmental administration, and the population and can mutually empower all the actors involved.